Ketamine: A cure for depression?

Ketamine: A cure for depression?

Depression is one of the most common mental disorders in the United States.

An estimated 7.1 percent of Americans have experienced major depression in the last year, of which 80 percent reported difficulty with work, home and social activities due to depression. Depression is now the leading global cause of disability, and yet our understanding of its cause and treatment is still in its infancy.

In fact, most of what we know about treating depression has been discovered by accident.

Tuberculosis, once a global pandemic, left doctors and scientists in the 1950s furiously scrambling to find a cure. Among the many drugs they tested, iproniazid, a type of monoamine oxidase inhibitor (MAOI), had a curious, unintended side effect. It caused patients to become “inappropriately happy.”

Iproniazid was not found to be effective for treating tuberculosis, despite the euphoria it seemed to cause, but it did find a new purpose as one of the first marketed antidepressants. Years later, when its less desirable side effect, liver damage, became a widespread consequence of use, iproniazid was discontinued.

Another accidental treatment for depression came in the form of imipramine. First synthesized in 1951 as an antihistamine, it was later discovered to alleviate symptoms of severe depression when it was prescribed to a depressed patient who also happened to be suffering from allergies.

While imipramine also brought along a host of undesirable side effects such as low blood pressure, rapid heart rate, blurred vision, skin rashes, and blood disorders just to name a few, it also had the effect of modifying serotonin levels in the brain—an important neurotransmitter associated with happiness and wellbeing.

It was this action of increasing serotonin that inspired a wave of newer and better antidepressants. This new class of drugs known as selective serotonin reuptake inhibitors (SSRIs) most famously includes Prozac, Zoloft and Paxil. But exactly how serotonin works in relation to relieving symptoms of depression is not exactly known.

Prozac may increase levels of serotonin in the brain in a matter of hours, but patients do not typically feel improvement for weeks to months. Inversely, depleting serotonin doesn’t cause depression.

But even with all this uncertainty, much of the focus in treatment for depression, anxiety, PTSD and bipolar disorders has been in the development of more tolerable drugs targeting serotonin. Unfortunately, severe side effects still persist, including sexual disfunction, dramatic weight gain, liver toxicity, and suicidality.

These medications take a long time to work if they work at all. According to some researchers, up to 30% of patients with major depression do not respond to antidepressants – a condition known as treatment resistant depression (TRD). And for those that do respond to treatment, the benefits go away once the medication is discontinued.

Fast forward to 1999, the year that ketamine was declared a controlled substance in the US due to recreational abuse. Ketamine had been used as an anesthetic for half a century and is preferred in many surgical environments as it does not impair breathing or require refrigeration, but it drew the attention of Yale researchers in the late 90s because of its role in blocking glutamate receptors.

Led by Dr. John Kristal, chief psychiatrist at Yale Medicine, the researchers discovered ketamine relieved symptoms of depression and did so almost instantly. All it took was a single dose much smaller than would be used for anesthesia.

Since then, at least a dozen studies have replicated the effect of ketamine on major depression, often on patients with TRD. The benefits have also been seen in patients with anxiety, bipolar disorders, PTSD and chronic pain. 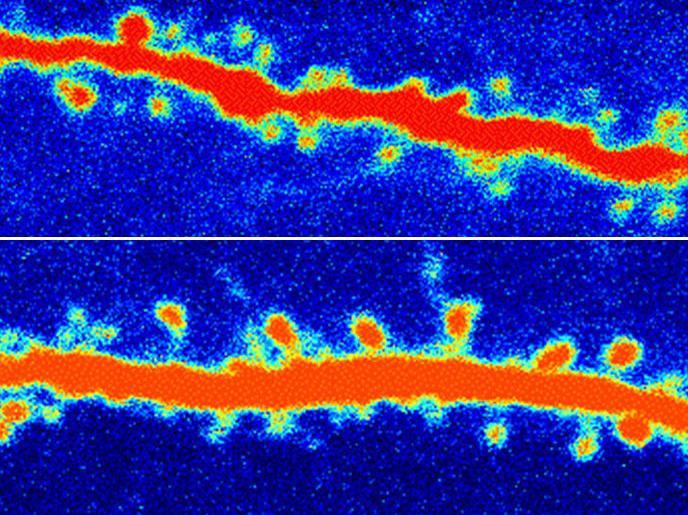 Neurons in the brain before (top) and after (bottom) ketamine therapy. The higher number of orange nodes indicates restored connections in the brain.

Ketamine’s effect on glutamate through a series of complex interactions causes the brain to actually form new neural connections. In this regard, unlike SSRIs, the benefit of the therapy lasts well after the medication has left the body. While there is still no definitive cure for depression, the mechanisms associated with glutamate production are leading many to believe that ketamine could be a “miracle drug” for treating mental health disorders.

The current accepted protocol for ketamine treatment for mood disorders is a series of six IV infusions over a period of 1-2 weeks.

Patients with thoughts of hopelessness, self-harm or suicidal ideation often notice those thoughts and feelings dissipate first. Other patients may not notice any improvement in mood until after completing a full course of six infusions. Some patients require more infusions and more time following their infusions before feeling significant relief.

Ketamine therapy is rapidly becoming available across the United States because of the relief that it brings for those suffering from mental health disorders. While there is still much to be learned, the success it has shown with severe depression, suicidal ideation, anxiety, bipolar disorders and PTSD is now offering new hope for those that need it most.

Nova Vita is the first and only ketamine infusion center in Hidalgo County and surrounding areas. We bring decades of clinical experience and an excellent clinical reputation amongst the community. If you or a loved one is suffering from depression and/or anxiety and has questions about Ketamine treatment, we invite you to call us and schedule a free phone consultation to decide if Ketamine infusion therapy for depression is right for you. Contact: (956) 335-0250